Welcome to the 19th issue of the Rust GameDev Workgroup's monthly newsletter. Rust is a systems language pursuing the trifecta: safety, concurrency, and speed. These goals are well-aligned with game development. We hope to build an inviting ecosystem for anyone wishing to use Rust in their development process! Want to get involved? Join the Rust GameDev working group!

You can follow the newsletter creation process by watching the coordination issues. Want something mentioned in the next newsletter? Send us a pull request. Feel free to send PRs about your own projects! 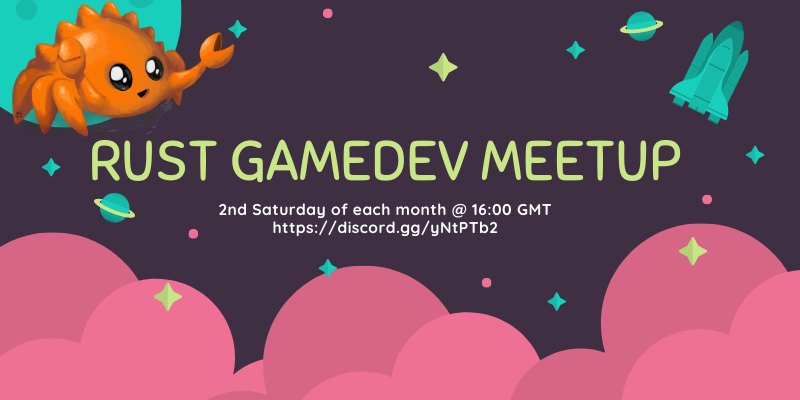 The second Rust Gamedev Meetup happened in February. It was an opportunity for developers to show off what Rust projects they've been working on in the game ecosystem. Developers showed off game engine demos, in-game playthroughs, tooling, and more. You can watch the recording of the meetup here on Youtube.

The next meetup will take place on the 13th of March at 16:00 GMT on the Rust Gamedev Discord server, and can also be streamed on Twitch. If you would like to show off what you've been working on, fill out this form.

Flesh by @im_oab is a 2D-horizontal shmup game with hand-drawn animation and organic/fleshy theme. It is implemented using tetra. This month's updates include:

Fishgame (web build) is an online multiplayer game, created in a collaboration between Nakama, an open-source scalable game server, and the Macroquad game engine.

Teki is a free and open-source fangame of the Tōhō series using SDL2 and Legion for ECS. It is aimed to be a shoot ’em up game with "lots of bullets" a.k.a danmaku 弾幕 - literally "barrage" or "bullet curtain" in Japanese.

This month's updates include:

Harvest Hero is undergoing a shop system rework. However, new abilities are still being implemented. You can now use Zhebnog's Hourglass to stop time and get weird.

Built on top of Emerald by Bombfuse.

This month's updates include:

A/B Street by @dabreegster is a traffic simulation game exploring how small changes to roads affect cyclists, transit users, pedestrians, and drivers, with support for any city with OpenStreetMap coverage.

In February, Bruce implemented lagging green traffic signals, Michael and Yuwen released the new day UI theme. More cycle paths and service roads were imported for all maps, and we added loads of maps, a new per-country picker UI, and dynamic font loading. Try out Taipei in the web browser to see all of this in action! 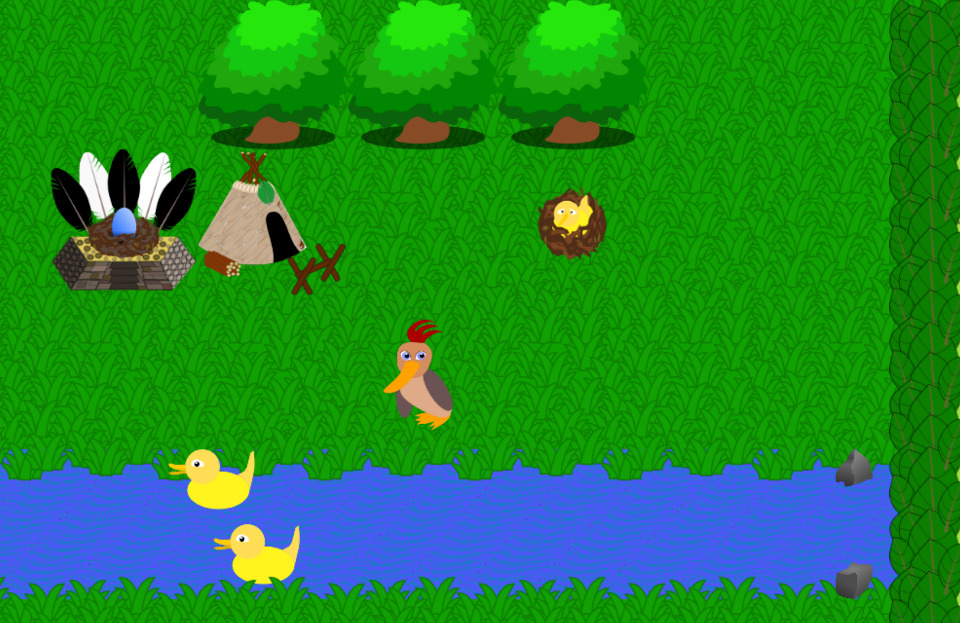 Paddlers (GitHub, Online Demo) by @jakmeier is an experimental MMORTS with the backend and the web client all written in Rust.

February gave birth to Paddlers release 0.2.1 and a ton of new game mechanics. It features a skill map, quests, and a refreshed take on the tower defense aspect of the game. On top of that, the rendering engine (part of the Paddle framework) has been reworked and now allows for custom shaders. Read all about this month's changes in this article released on the developer's private website.

Stellary 2 by @CoffeJunkStudio is a 3D real-time space shooter in which the player has to prevail against enemy space ships.

The latest updates include:

Theta Wave is a space shooter game by developers @micah_tigley and @carlosupina. It is one of the showcase games for the Amethyst Engine. In the past month, they have been focusing on refactoring the motion system to make the code more approachable to other contributors. 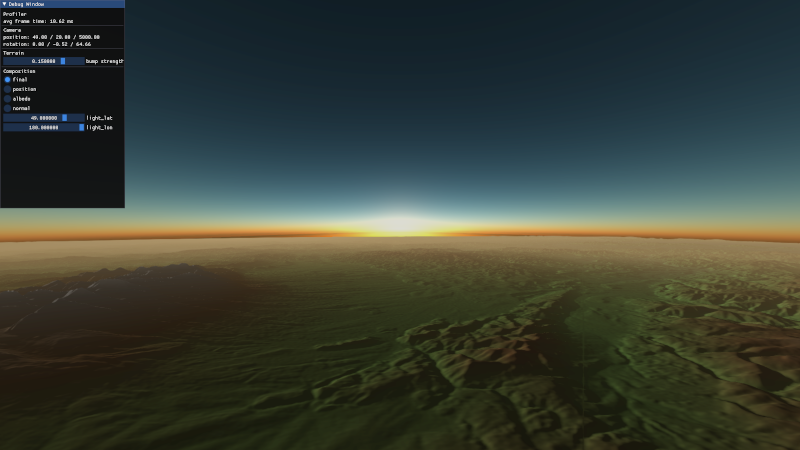 SeniorSKY is a flight simulator that uses the Vulkan API, developed by @pmathia0. As an aerospace engineering student, Peter has always been interested in how a flight simulator works under the hood. The development of SeniorSKY started as a hobby project during university studies.

SeniorSKY uses real-world elevation data with 1 arc second precision and can render the whole globe in real dimensions. During the flight, the terrain tiles are loaded dynamically based on real GPS coordinates of airplane, with a decreasing level of detail further from the camera. This is achieved using a combination of a terrain-quad-tree and GPU tessellation. 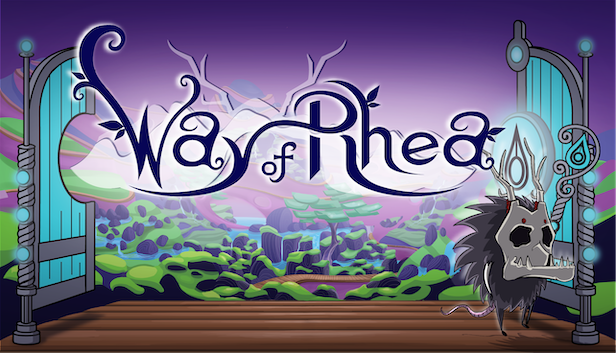 Way of Rhea is a picturesque puzzle game that lets you correct your mistakes. Change your color, teleport past the colored gates, master the color-powered circuits, and befriend the crabs-but don't let them out!

This month's major updates include: 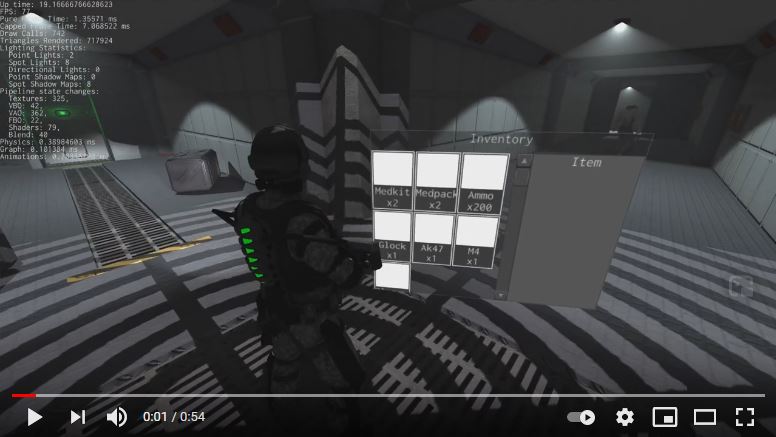 Station Iapetus by @mrDIMAS is a 3rd person shooter on the space prison Iapetus near the Saturn. 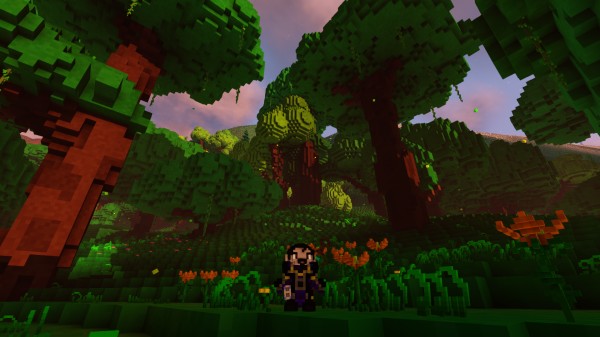 A lush forest to explore

In February, lots of work has been done on worldsim, with travelling merchants being worked on. Some experiments have been happening on procedurally generating giant trees. Lots is being done on the combat end, with dual wielding and modular weapons being a big focus. Player trading was also implemented, which allows items to be shared on the server. A large internal shift is being made from diesel to rusqlite.

A rework of attacks was done to allow their effects to be more dynamic. Lots of work has been done on the art team, with new weapon models, new mobs like fish. Some quality of life improvements were added, like humanoids automatically deploying gliders while falling to avoid fall damage. CI changes were made to finally have the Github mirror update periodically without error from LFS storage. In March, Veloren will release 0.9. 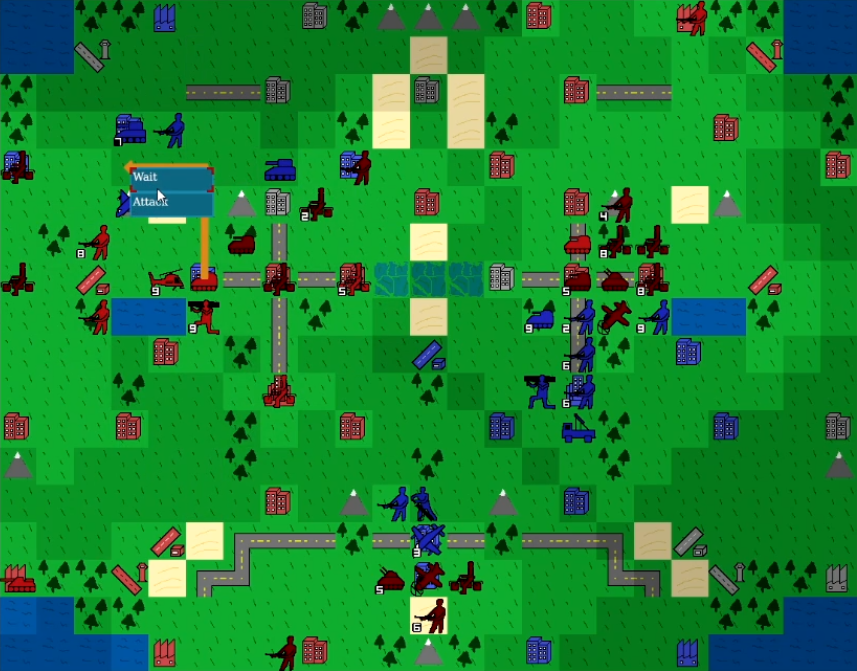 Project YAWC is a turn-based strategy game in development by junkmail. February saw the release of Alpha 4, bringing special units and auctions to determine ownership of special units, as well as changes to netcode, balance, and UI.

Those interested in participating in the alpha test should fill out this form. To learn more, you can follow the new @projectyawc Twitter or send an e-mail to projectyawc@gmail.com.

Antorum Online is a micro-multiplayer online role-playing game by @dooskington. The game server is written in Rust, and the official client is being developed in Unity.

The Armorcrafting, Weaponcrafting, and Salvaging skills were implemented this month! Players can now craft gear in town using materials gathered out in the world. They can also break down old or unwanted gear to recycle it.

Fullscreen Exclusive Is A Lie (...sort of) # 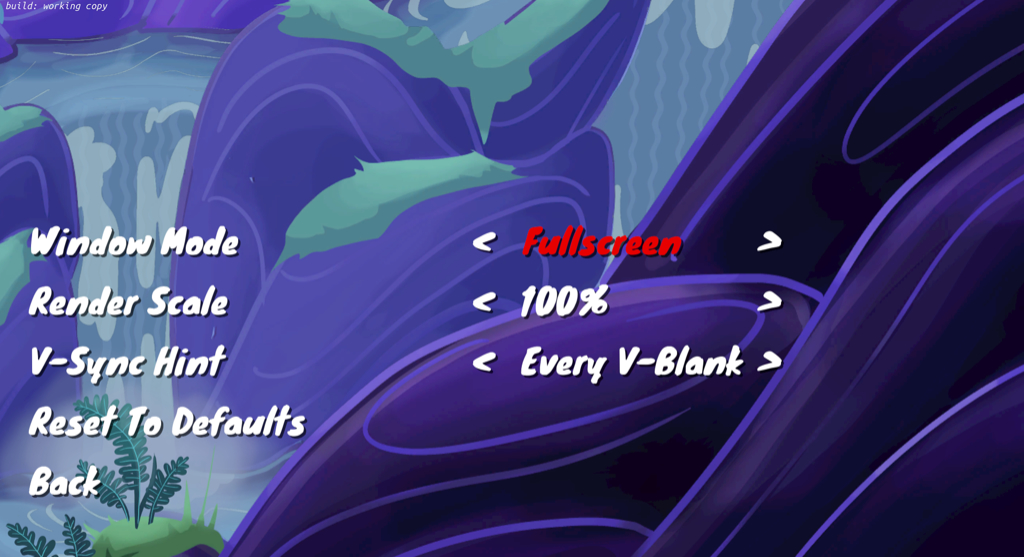 Rhythm game in Rust using Bevy is an introductory tutorial for Bevy made by @guimcaballero. It guides through how to use Bevy to develop a Rhythm game, including how to play audio, use GLSL shaders, and make a simple menu screen.

godot-vs-rapier by @extrawurst is a project that compares Godot's built-in physics against Rapier.

This month biggest update: Macroquad got its own fully skinnable and customizable immediate mode UI system 🎉.
The new system took its origins from a heavily refactored megaui and supports custom font sizes, fonts and skins for each UI element.
While work is still in progress, all important decisions were made and implementation PR got merged.

Tetra is a simple 2D game framework, inspired by XNA, Love2D, and Raylib. This month, version 0.6 was released, with some big changes and features:

For more details, see the changelog, or 17cupsofcoffee's twitter thread about the release. 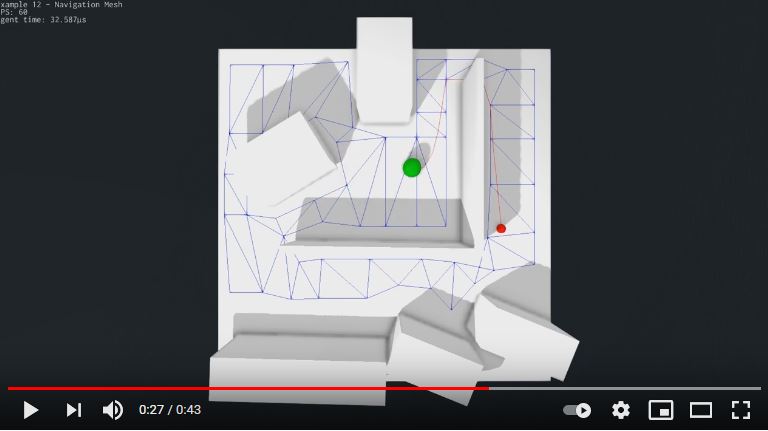 rg3d (Discord, Twitter) is a game engine that aims to be easy to use and provide a large set of out-of-box features. Some of the recent updates: 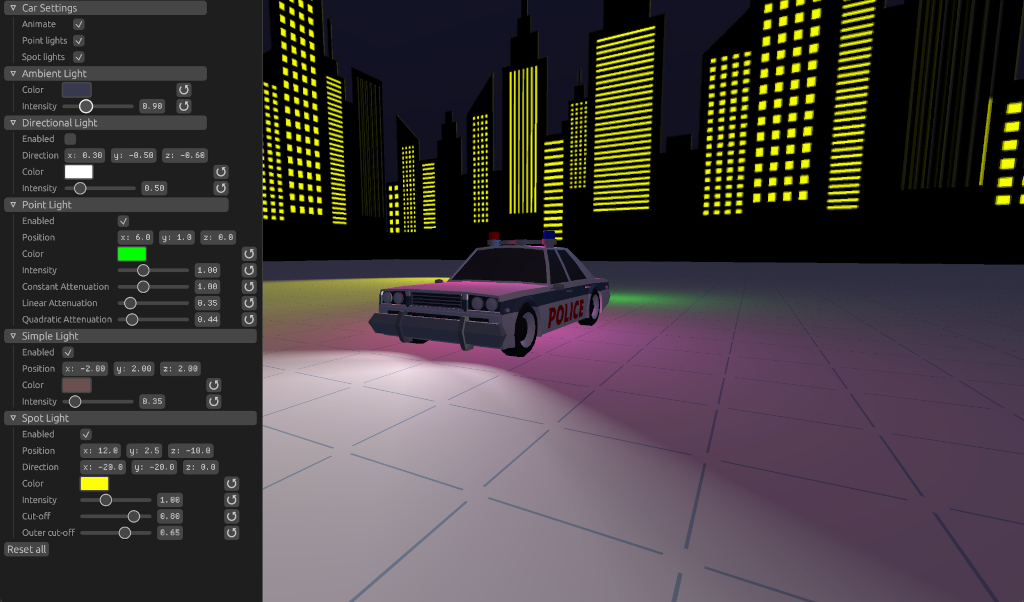 Dotrix (YouTube, Discord) by @lowenware is an ECS based 3D game engine with renderer built around the wgpu-rs. 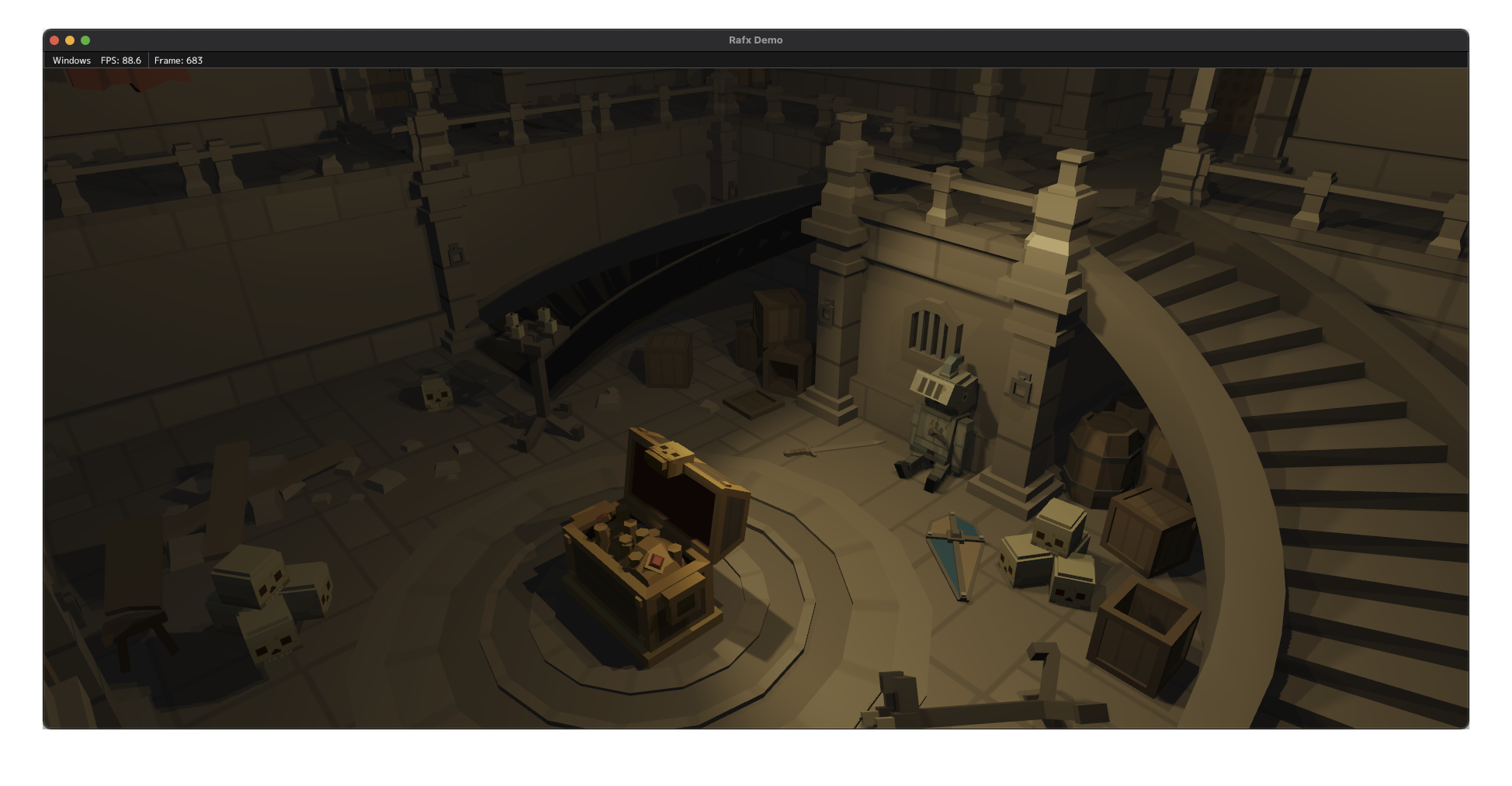 Rafx is a multi-backend renderer that optionally integrates with the distill asset pipeline. Rafx is divided into three tiers of functionality:

rafx-framework builds on the API layer using ideas found in modern shipping AAA titles. Rendering is pipelined in a separate thread in three phases, using jobs to extract data from the main thread, process the data on the render thread, and write the draw calls to command buffers. [Tatarchuk 2015] A render graph ensures correct synchronization. [O'Donnell 2017] The framework also provides a material abstraction and shader pipeline.

rafx-assets adds integration with the distill asset pipeline. This ensures that when an asset like a mesh is loaded, other related assets like textures/material/vertex data are loaded. By integrating with Distill, rafx provides advanced features like streaming live asset updates to remote devices.

egui by @emilk is an easy-to-use immediate mode GUI library in pure Rust.

This month versions 0.9 and 0.10 of egui were released with many improvements big and small, including a 2D plot, more text styles, disabling widgets and improved documentation.

You can try out egui in the online demo.

This Month in Mun #

It's been a long time coming, but the Mun Core Team is closing in on the finish line for Mun v0.3. They are only a couple of pull requests away from locking the build for bug fixes and documentation. The February updates include: 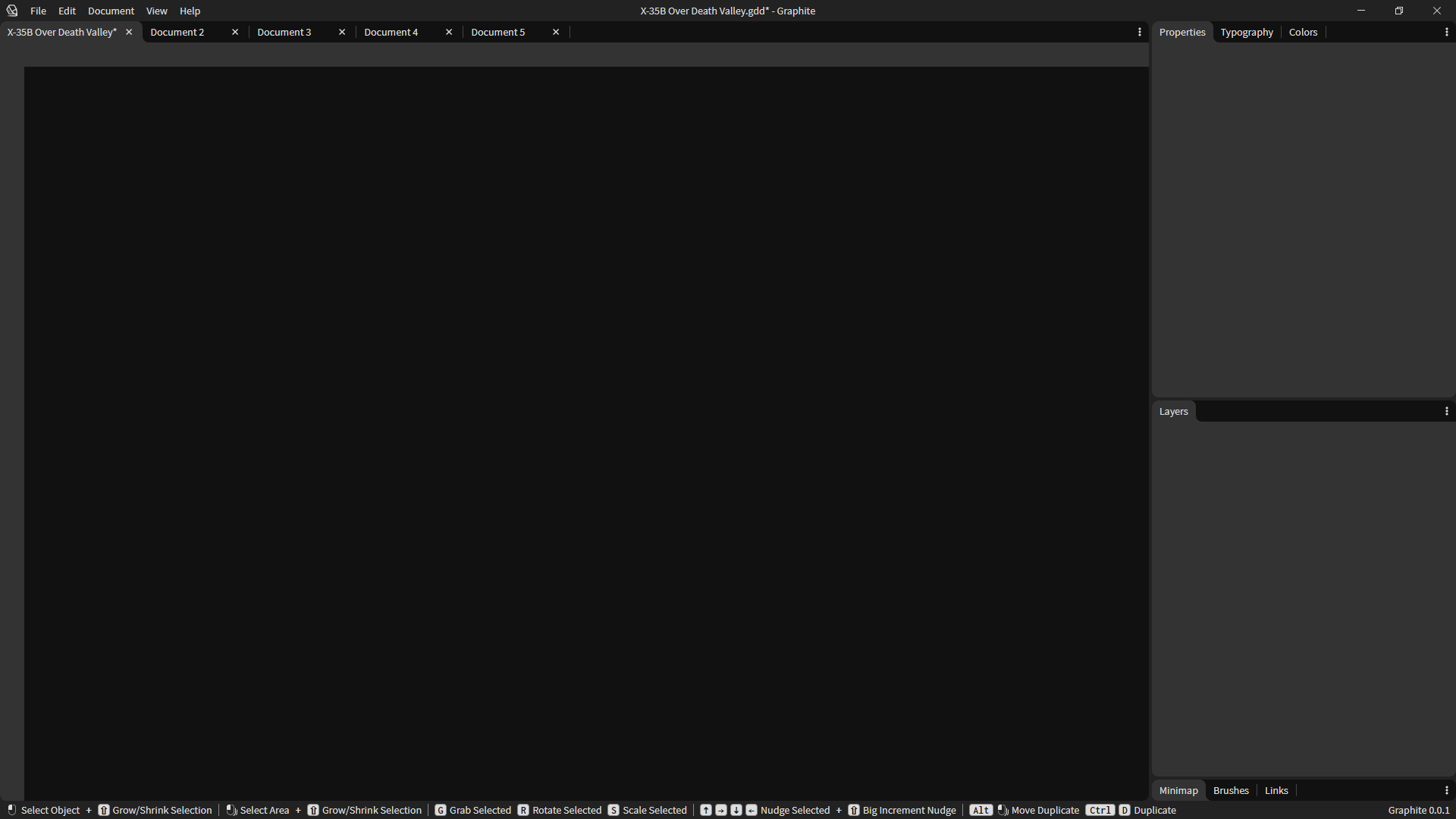 Progress on the GUI

Since February's Rust Gamedev Meetup which announced the Graphite vision has attracted tremendous interest, community advice has shifted the development strategy to focus on a 0.1 MVP release ASAP:

wgpu-rs is a WebGPU implementation and API in Rust.

naga is the shader translation library/tool.

Distill is an asset pipeline for games, reading artist-friendly formats from disk, processing them into your engine-ready formats, and delivering them to your game runtime. Distill handles dependencies between assets, import & build caching, cross-device hot reloading during development, packing assets for a shippable game build, and more.

Distill's design is inspired by Unity's asset system and Frostbite's Scaling the Pipeline. Distill leverages purity in the functional-programming sense to deliver a robust and scalable experience for the asset processing pipeline. With LMDB backing storage of metadata, Distill is able to avoid blocking asset loading while assets are being imported which eliminates the most common frustration with existing commercial offerings. Additionally, Distill is able to provide fully consistent snapshots of asset metadata to readers over capnp-rpc.

Basis Universal is a state-of-the-art supercompressed texture codec that was recently open-sourced by Binomial in partnership with Google. It was contributed to the Khronos glTF 3D Transmission Open Standard.

The library has two primary uses:

Basis universal format can also store mipmapped textures and cubemaps, neither of which is possible with "normal" file formats. Mipmaps can be generated by the library during compression.

bevy_egui provides a Egui integration for the Bevy game engine. It supports bevy_webgl2 and implements the full set of Egui features (such as clipboard and opening URLs).

This month versions 0.2 and 0.3 were released, providing an integration with Egui 0.9 and 0.10 respectively.

Try out the online demo.

rkyv is a zero-copy deserialization framework for Rust. It's similar to FlatBuffers and Cap'n Proto and can be used for data storage and messaging.

Version 0.4 was released this month and brought some big changes and improvements:

This release completes the project's initial feature set, and a request for feedback has been opened to help with future project planning.

wasm_plugin is a new low-ish level tool for easily hosting WASM based plugins for modding or scripting.

It consists of two crates:

Want something mentioned in the next newsletter? Send us a pull request.